Valve recently updated de_cobblestone, or cbble, after complaints on the map from the community. In short, the changes remove a lot of the large distances and instead makes the map more similar to inferno or dust2, with smaller bombsites and more cover.

We love Cobblestone and think that a lot of the hate it receives is because of the map being different, but also not as explored as other maps. For example, there aren’t any great smoke tutorials out there for this map.

We’ll be trying to help out the community by sharing some grenades, wallbang spots and strategies on the new cobblestone. For this post, we sat down and came up with a lot of useful smokes for Cobblestone. Our focus was on smokes with easy to remember markers and to avoid having to jump / run as much as possible, so the smokes become even more consistent. You can find our smokes below.

Here’s a playlist for all of our Cobblestone smokes.

Here’s a practice config that will make practicing these smoke grenades easier.

Smoking off connector and side door, to block rotators

Here’s 2 smokes that are great in combination, which will block off any rotators from A so you can take B site.

This smoke allows you to smoke off connector, to block off any rotators from A.  Good when combined with the Side door smoke.

This sidedoor smoke is mainly used in combination with the connector smoke, to block off any rotators from A. Make sure to use a jumpthrow script to hit this consistently:

These are some of my favorite smokes on Cobblestone. These 3 in combination block of vision of all of B site from anyone playing close to the connector or in dropdown / skyfall. Some of them can also be effective when used one by one.

How the 3 smokes will look together 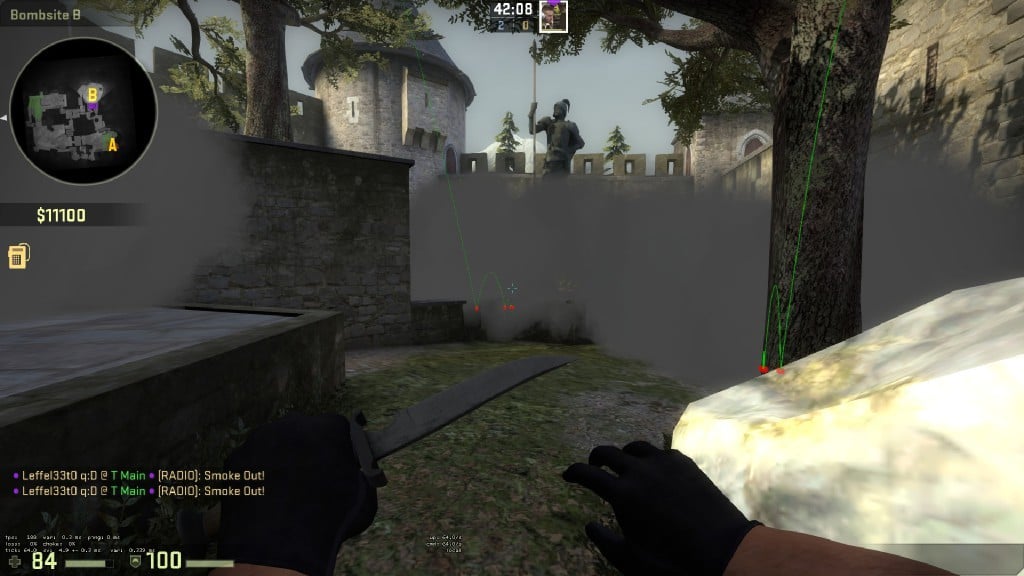 This is a great way to smoke of Skyfall / Dropdown. A very easy smoke, and very consistent.

Here’s an alternative smoke, in case your opponents tend to play close on quad / stairs:

Smoking off B hut

The hut on B can be a pain, and is often the home for an AWPer. While you can wallbang through the entire hut, it’s often smarter to just smoke it off entirely if you’re facing a competent AWPer. Here’s 2 smokes that will smoke off the entire hut area together, leaving you to worry only about site and the far edges of B.

Smoking off the side door part of downfall

If you’re planning a rush through downfall or want to split push through it, a great idea is to smoke off the side door part of it, eliminating some angles you’d otherwise need to check.

Smoking off A hut and connector will allow you to stop any rotations from B to A, and also allows you to focus on clearing out the site. Especially effective when used in combination with the balcony smoke, which you can find below.

Below are two connector smokes, one with slightly easier markers and another where you don’t need to jump or run, making it very consistent.

You can combine the connector smokes with a smoke in hut, to make sure that you don’t need to worry at all about that area. Below is a very easy smoke for the hut.

Here’s how to smoke of Balcony on A. It’s one of the harder smokes, and make sure to use the jump throw bind to do it consistently:

That’s all for now. Now it’s your turn!

That’s all we had for you today. Do you have any great smokes on Cobblestone or on other maps? Leave a comment below and we’ll share them in another post!